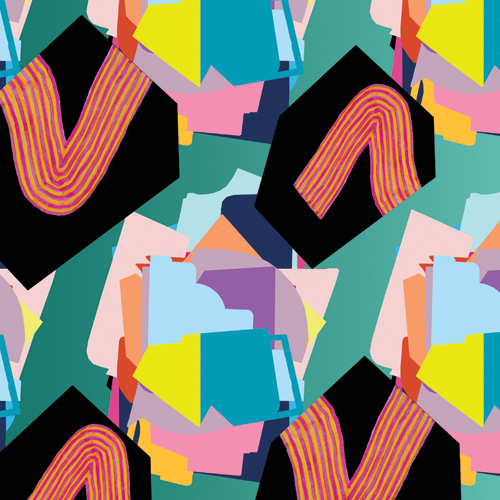 Precipitated by a recent exchange with a writer who proposed to refer to Mark Joshua Epstein as an emerging artist, Two-fold is a makeshift retrospective, a winking reappraisal of the artist’s output broken up and reconstituted as a patterned flag. Epstein intends for the pattern, created from the shaped supports he has been developing since 2016, to make future appearances in his paintings and works on paper.

Drawing on a long-held aspiration to see his paintings change orientation during the course of an exhibition, the flag asserts, in a sense, that top and bottom can become vers. With the addition of fall winds, Two-fold will move, causing shapes to shift. Viewers will see Epstein’s forms from a variety of perspectives—none proclaiming dominance over the other. New patterns emerge, discrete paintings join together, and the double-sided nature of the flag allows past works to be seen again and anew.

Selected group shows include DAAP Galleries at the University of Cincinnati (Cincinnati, OH), AGENCY (Brooklyn, NY), Beverly’s (New York, NY), Schema Projects (Brooklyn, NY), and Hoffman LaChance Gallery (St Louis, MO). Epstein was recently included in Queer Abstraction at the Des Moines Art Center, which will travel to the Nerman Museum, Overland Park, KA. He has been a resident at Vermont Studio Center, Millay Colony, Jentel Foundation, Macdowell Colony, I-Park and the Kimmel Harding Nelson Center, amongst others. He is the recipient of a Traveling Scholar award for alumni from the School of the Museum of Fine Arts, Boston.