Frequent use of digital technology like cell phones and computers plays such a seductive, pervasive role in my life (and nearly everyone’s), especially during this pandemic. Embracing the latest news, message, app, or software, I capture, link and distribute what interests me. Also constant, but less obvious in our lives, are networks of digital surveillance that invade our privacy with virtually every online activity. In tandem, surveillance by digital cameras has proliferated, providing an endless loop of doubtful examination and ultimately revealing critical threats to freedom, civil liberty and identity privacy. On average, one surveillance camera operates per every eleven citizens, as we are recorded about 75 times per day. Among the targets of relentless surveillance are our email, phone calls, texting, online activities like personal finances, photographs, social media and business communications, political preferences, and location/movement tracking services.

My art looks back at these government, corporate, and personal cameras, especially at the vast insertion of surveillance cameras into the natural worl and focuses on the secretive relationship between subject and spectator.

In 2020, the federal government overturned the FCC regulation that banned internet service providers from selling our private information without our permission.* Beyond individual concerns about privacy, security, and personal data, surveillance is a civil rights issue for all, but especially affects marginalized communities. In St. Louis, where I live, government/police surveillance with no oversight is an ongoing issue, threatening the civil liberties of all, but especially those of people of color, immigrant and refugee communities, and local activists. Surveillance focuses tracking, profiling, and policing disproportionately on black and immigrant populations. Discriminatory treatment–through biometrics, CCTV, online activities, and telecommunications, racializes surveillance using markers of identity–namely race, class, sexuality, and gender.  “Today’s seeing eye is white.”***

In July, a member of the St. Louis Board of  Alderman made a resolution for the city to contract for limitless aerial ‘spy plane’ surveillance, meaning drones. The Missouri ACLU websites states that when mass surveillance systems are deployed by local police, they are frequently used to target communities of color. “While the nation is discussing the demilitarization of police, St. Louis is considering turning wartime specific technology on its own citizens. This is a threat to liberty. This summer Americans have taken to the streets to protest police brutality and demand change. During the protest surrounding the death of Freddie Gray, officials in Baltimore quietly and secretly turned to the very surveillance technology now before the (St. Louis) Board of Aldermen to track protestors…”** Consideration of the bill allowing aerial surveillance is currently before the Board of Aldermen again in 2021, as the organization Privacy Watch STL works for transparency, oversight, and accountability for the St. Louis Metropolitan Police’s use of surveillance technology. Meanwhile, none exists.

While the word surveillance means to watch over, the panopticonembodies this concept as an all (pan) seeing (opticon) social discipline. Both a type of institutional building and a system of control designed by the English social theorist Jeremy Bentham in the 18th century, it is brought to life in the form of a central observation tower centered within a circle of prison cells. Panopticon architecture allows observation of occupants without their knowledge.  At any one moment, prisoners will never know whether or not they are being watched by the panoptic all-seeing eye-in-the-sky. <i>Opticon</i> is inspired by these historic traces, along with the ongoing use, of the panopticon as a means of surveillance by disciplinarian societies.

My hope is to increase awareness of the scope and the dangers of this watching over, currently active as a massive government/corporate intrusion into our personal and civic lives. 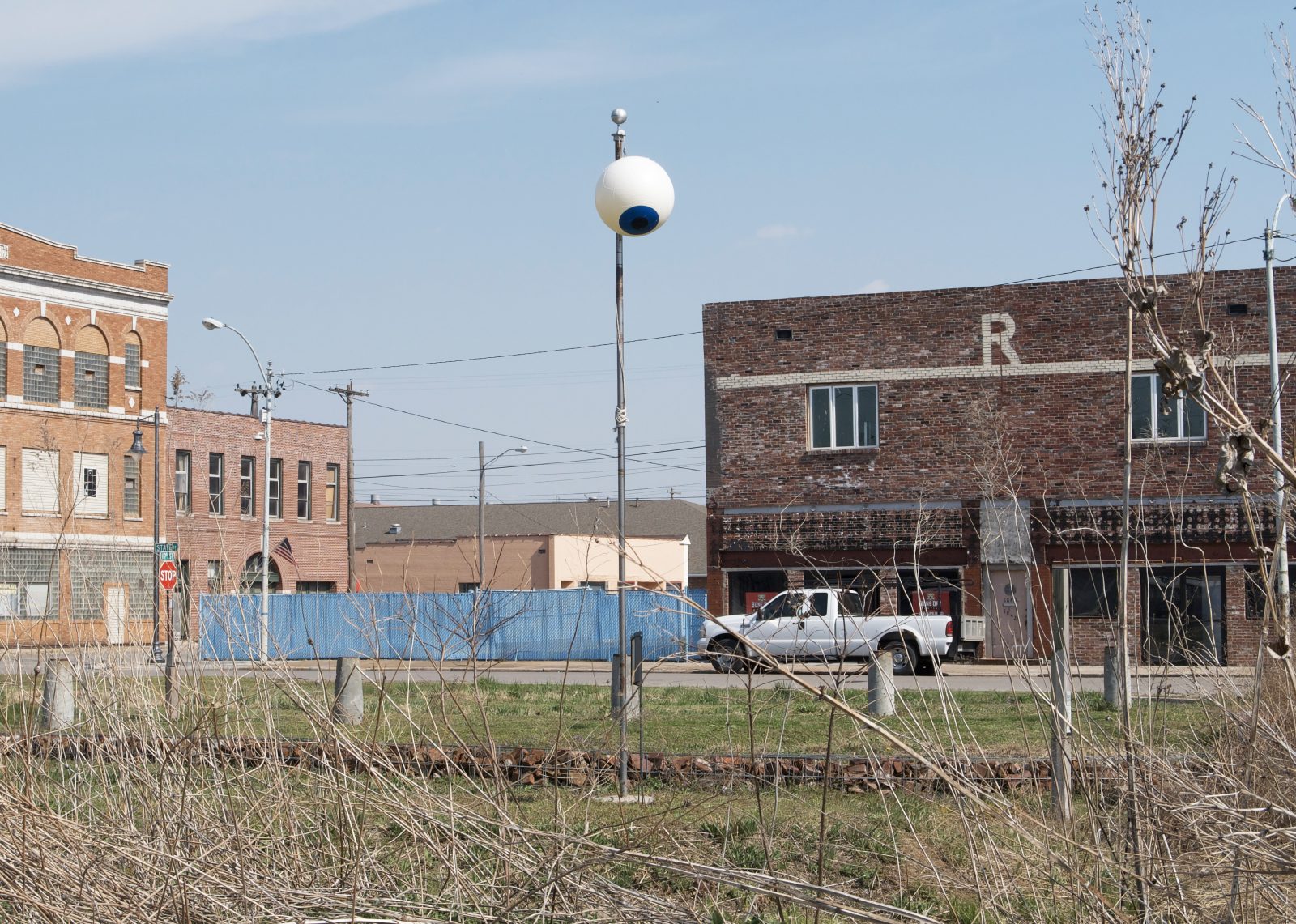