Nick Wylie – The Turtle and the Scorpion: With the catching end the pleasures of the chase 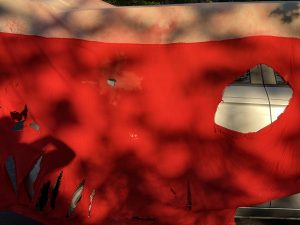 The Turtle and the Scorpion, 14′ x 24′ worsted wood flag replica, (2019-2021) documented while drying after being dyed with the “touch of lavender”, Carl Sandberg’s delicate way of saying Lincoln was queer.

“A lonely trunk, despoiled of its verdure, shorn of its foliage, unshading and unshaded, to murmur in a few more gentle breezes, and to combat with its mutilated limbs a few more ruder storms, then to sink and be no more.” —Abraham Lincoln describing the future of the US run by mob rule in his “Address Before the Young Men’s Lyceum of Springfield, January 27, 1838,” a speech given in reaction to the lynching murder of Francis McIntire in St. Louis.

May 24, 2021 is the 160th anniversary of the first death of the Civil War, that of Elmer Ellsworth, who is Nick Wylie’s second cousin five times removed. Abe Lincoln, who’s death was the last of the civil war, shared a queer and intimate love with the 24 year old Elmer, who died taking down a confederate flag that Lincoln could see from the Oval Office. The blood-stained flag was ripped up and distributed to soldiers as sanctified relics as they marched south at Lincoln’s mournful, ire-filled command.

The anniversary of Ellsworth’s death in 1861 will be marked by the display, of “The Turtle and the Scorpion…” at STNDRD, a 14×24-foot wool replica of the Confederacy flag he  died taking down. It has been cut up, bled on, dyed with a touch of lavender, and will be displayed properly: upside-down in the dirt. It is the official and original flag of the Confederacy: it has two red stripes, one white, and a star spangled blue square in the upper left corner. It more closely resembles early US flags than the battle flag known from the Dukes of Hazzard and front porches across the country. The battle flag was developed because of all the confusion the dumbly too-similar original flag (the “stars and bars”) caused at the Battle of Bull Run.

Today, the racist Confederacy continues to die a too-slow death. As recently as January, we saw its zombie soldiers fitting violently as they finally got to assault the Capitol building. It is on this anniversary and marked with this exhibition that the little-known “true” version of the Confederate flag will be desecrated to speed the decay of the ideas, practices, and systems it represents.

US citizens’ supposedly shared contempt of the Confederacy fuels a narrative of a righteous Civil War, and is used to justify  the continued imperialist violence that the country inflicts on the world. The way many Americans revile the Confederate flag is not unlike the disgust that people of conscience worldwide feel when they see the US flag.

Viewers are invited to further desecrate the flag in ways of their choosing, and to learn more about the queer history of Elmer Ellsworth and Abraham Lincoln, the murder of Francis McIntire, and the story of the Frog/Turtle and the Scorpion by surfing an exhibition site (Follow the QR Code below) made in collaboration with webmaster and composer John Paul Glover.

Nicholas Wylie is an artist, organizer, and educator based in Chicago. Wylie’s art practice, which incorporates video technology, performance, drawing, and queer time travel, has haunted galleries in Chicago and beyond since 2003. Usually working collaboratively, in 2014–18 he worked on various streaming and participatory performances with John Paul Glover under the moniker “The Couming Edge,” and in 2012–14 on publications, foot-washing performances, and more with Andrew Mausert Mooney as “Clean Every Whit.” Wylie’s research of men’s mysterious nineteenth-century amorous affiliations led him to discover that a family member, Elmer Ellsworth, had an intimate relationship with Abraham Lincoln. His most recent body of work focuses on this dandy abolitionist, who was first to die in the Civil War after taking down a giant Confederate flag. Lincoln wept.

If you must know, here are some things about Wylie’s education and labor backgrounds: He currently serves as Managing Director of Public Media Institute, an arts and media nonprofit in Chicago. From 2015 to 2018 he served as Associate Director of Southern Exposure, a 45-year-old artist-run nonprofit in San Francisco. In 2006 he co-founded Harold Arts, a Chicago-based non-profit arts organization with a residency in Ohio, and was its Co-Director until early 2010. He then co-founded ACRE (Artists’ Cooperative Residency and Exhibitions), a 501(c)3 with a residency in rural Wisconsin and an extensive exhibitions program in Chicago. Wylie served as Co-Director of ACRE until moving to San Francisco and joining its Board of Directors as Treasurer 2015. Wylie was also Founding Artistic Director at Mana Contemporary Chicago, a large art center in Pilsen, from 2012 to 2015. Wylie received his BFA from Carnegie Mellon University, did post-baccalaureate work in Art History at Northwestern University, and went to University of Illinois at Chicago for his MFA. He has taught artmaking and arts administration courses at the School of the Art Institute of Chicago, University of Illinois at Chicago, and University of St Francis. Recent curatorial projects include “Shut Up Stone Mountain” (co-curated with Ahniya Butler) and “Work for the People or Forget About Fred Hampton.” An upcoming group exhibiton of queer time displacement, curated in collaboration with Paula Volpato and Sofia Moreno, will travel from Chicago, IL to a new PMI space Catskill, NY.